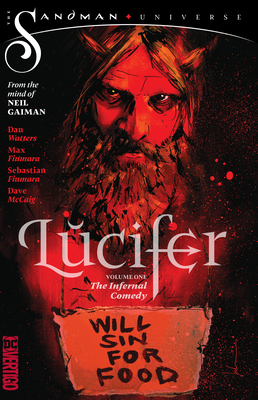 The Prince of Darkness is missing, and from the look of things he's not coming back. Blind, crippled, and without a penny to his name, the onetime ruler of Hell is now a wizened, unkempt old man trapped in a small town where sinister forces torment him at every turn and nothing is as it seems. He has no memory of how he got here, no hope of escape, and no way to track down his child--the only entity capable of preventing the end of the world.

At the same time, a police officer in Lucifer's adopted hometown of Los Angeles is about to lose everything he holds dear. Desperate to find a reason for his suffering, Detective John Decker is drawn into a shadowy conspiracy whose widely varied members share a single common purpose: to kill Lucifer Morningstar.

With monsters and magicians from every plane of reality set against him, can the Lightbringer heal his broken mind and body and regain his wrongful place in the cosmos?

Acclaimed author Dan Watters (The Shadow, Deep Roots) and the incredible art team of Max and Sebastian Fiumara (All-Star Batman, The Amazing Spider-Man, Abe Sapien) begin an all-new chapter in the saga of one of the Sandman Universe's most mesmerizing characters in Lucifer Vol. 1: The Infernal Comedy--from the mind of New York Times best-selling author Neil Gaiman!

Dan Watters is a London based writer who has written crime and mystery comics for various independent
publishers, including his creator owned title Limbo for Image, Deep Roots for Vault Comics, The Shadow (with Si Spurrier) for Dynamite, and sci-fi and fantasy comics based on video games for Wolfenstein, Dark Souls, and Assassin's Creed for Titan Comics.

Bestselling author Neil Gaiman has long been one of the top writers in comics, and also writes books for readers of all ages. He is listed in the Dictionary of Literary Biography as one of the top ten living post-modern writers, and is a prolific creator of works of prose, poetry, film, journalism, comics, song lyrics, and drama. Gaiman's work has been honored with many awards internationally, including the Newbery and Carnegie Medals. His books and stories have also been honored with four Hugos, two Nebulas, a World Fantasy Award, four Bram Stoker Awards, six Locus Awards, two British SF Awards, A British Fantasy Award, three Geffens, an International Horror Guild Award and two Mythopoeic Awards.

“Full of both narrative and artistic surprises.” —A.V. Club

“Lucifer is one hell of a reintroduction to Sandman’s King of Hell.” —CBR