All the Great Territories (Crab Orchard Series in Poetry) (Paperback) 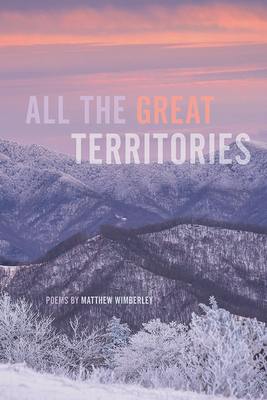 In 2012 Matthew Wimberley took a two-month journey, traveling and living out of his car, during which time he had planned to spread his father’s ashes. By trip’s end, the ashes remained, but Wimberley had begun a conversation with his deceased father that is continued here in his debut collection.

All the Great Territories is a book of elegies for a father as well as a confrontation with the hostile, yet beautiful landscape of southern Appalachia. In the wake of an estranged father’s death, the speaker confronts that loss while celebrating the geography of childhood and the connections formed between the living and the dead. The narrative poems in this collection tell one story through many: a once failed relationship, the conversations we have with those we love after they are gone. In an attempt to make sense of the father-son relationship, Wimberley embraces and explores the pain of personal loss and the beauty of the natural world.

Stitching together sundered realms—from Idaho to the Blue Ridge Mountains and from the ghost of memory to the iron present of self—Wimberley produces a map for reckoning with grief and the world’s darker forces. At once a labor of love and a searing indictment of those who sensationalize and dehumanize the people and geography of Appalachia, All the Great Territories sparks the reader forward, creating a homeland all its own. “Because it’s my memory I can give it to you,” Wimberley’s speaker declares, and it’s a promise well kept in this tender and remarkable debut.

Matthew Wimberley received his MFA in poetry from New York University. His poems have appeared in Best New Poets, Missouri Review, Poem-a-Day, diode, Pleiades,Shenandoah, and River Styx, among others.

“Matthew Wimberley’s deeply intimate and lyrical collection All the Great Territories maps a son’s journey through the landscapes of loss—through empty towns and black mountains and snow-covered fields. Forged by tender observations, these poems seek to uncover personal histories half-buried under layers of dirt and ash. They burn bright with elegy and longing for a father, a home, a memory of a life left behind.”—Vandana Khanna, author of Train to Agra

“The poems in this rich and incisive book are close-held and generous, in both detail and formal expression. Although the poet who has written these fine poems is young, he painfully recognizes the world he comes from is nearly lost. That is the blunt lot of rural America at the present moment. Thus, these poems have a moving, elegiac quality, but also, sublimely and through subtle implication, they acknowledge a hope, perhaps to come from the enduring land itself, where these poems of vital human experience are rooted. This is a book of knowledge, but it comes at us against our current grain, slowly, and in observable detail as it all happens in time.—Maurice Manning, author of One Man’s Dark

“We love how Matt Wimberley takes in the world, making an image-laden music. Like Wendell Berry and Larry Levis, he creates landscapes that enter the consciousness, sometimes healing it, sometimes breaking it open. Haunted by a father’s ghost, these poems sift through beauty and damage. We admire their compression and well-made lines, like the woods and mountains where they were written, though the title poem is a highway song, traveling the breadth of America, with its deserts and plateaus, red mud and tumbleweeds. In the soul tradition of Whitman, Kerouac, and Guthrie, these poems have heart.”—Dorianne Laux, author of Only as the Day Is Long: New and Selected Poems, and Joseph Millar, author of Kingdom