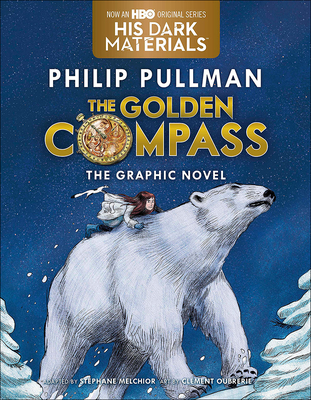 The graphic novel adaptation of The Golden Compass, one of the most celebrated books of all time, is now complete This edition contains all three volumes--the entire story.

Published in 50 countries with over 22 million copies sold, The Golden Compass, The Subtle Knife, and The Amber Spyglass are renowned for their engrossing storytelling and epic scope. These modern classics are must-reads for every book lover. Now, in this graphic novel adaptation of The Golden Compass, the world of His Dark Materials is brought to visual life. The stunning full-color art will offer both new and returning readers a chance to experience the story of Lyra, an ordinary girl with an extraordinary role to play in the fates of multiple worlds, in an entirely fresh way. This volume collects the full journey of Lyra to the far north, her rescue of the kidnapped children at Bolvangar, her escape via hot-air balloon, and her crucial role in Lord Asriel's ambitions to build a bridge to another world. Praise for The Golden Compass Graphic Novel: "The story's signature fantasies--the daemons, the armored mercenary polar bears, and the alethiometer--are realized with compelling force. This] retelling will bring Pullman's work new fans and give previous readers new pleasure." --Publishers Weekly, starred review "Belongs in all libraries that include Pullman's works." --School Library Journal "Pullman's original magnum opus is heady and dense, and it may prove challenging for some; this adaptation, with its visual accessibility, can help those struggling with the novel's complexity achieve an understanding without watering down the intricacies." --Kirkus Reviews

PHILIP PULLMAN is one of the most acclaimed writers working today. He is best known for the His Dark Materials trilogy (The Golden Compass, The Subtle Knife, The Amber Spyglass), which has been named one of the top 100 novels of all time by Newsweek and one of the all-time greatest novels by Entertainment Weekly. He has also won many distinguished prizes, including the Carnegie Medal for The Golden Compass (and the reader-voted "Carnegie of Carnegies" for the best children's book of the past seventy years); the Whitbread (now Costa) Award for The Amber Spyglass; a Booker Prize long-list nomination (The Amber Spyglass); Parents' Choice Gold Awards (The Subtle Knife and The Amber Spyglass); and the Astrid Lindgren Memorial Award, in honor of his body of work. In 2004, he was appointed a Commander of the Order of the British Empire. It has recently been announced that The Book of Dust, the much anticipated new book from Mr. Pullman, also set in the world of His Dark Materials, will be published as a major work in three parts, with the first part to arrive in October 2017. Philip Pullman is the author of many other much-lauded novels. Other volumes related to His Dark Materials: Lyra's Oxford, Once Upon a Time in the North, and The Collectors. For younger readers: I Was a Rat!; Count Karlstein; Two Crafty Criminals; Spring-Heeled Jack, and The Scarecrow and His Servant. For older readers: the Sally Lockhart quartet: The Ruby in the Smoke, The Shadow in the North, The Tiger in the Well, and The Tin Princess; The White Mercedes; and The Broken Bridge. Philip Pullman lives in Oxford, England. To learn more, please visit philip-pullman.com and hisdarkmaterials.com. Or follow him on Twitter at @PhilipPullman. STEPHANE MELCHIOR has worked as a screenwriter for both film and television. Recently, he turned his creative energies toward comics, penning both original stories and adaptations, including Raiju and Raiden with Loic Secheresse and an adaptation of The Great Gatsby with Benjamin Bachelier. CLEMENT OUBRERIE is the acclaimed illustrator of more than forty picture books and is a co-founder of the 3D animation studio Station OMD. His comics include the Aya of Yopougon series by Marguerite Abouet and Pablo by Julie Birmant. His illustrations for The Golden Compass won an award at the International Comics Festival in Angouleme, France.