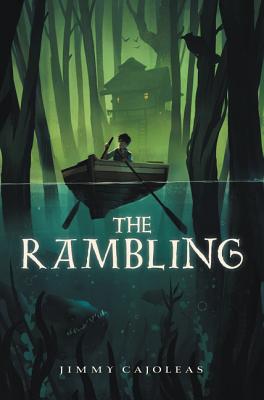 “This adventure story is about a boy searching for his wayward — then kidnapped — father. It’s an intriguing tale featuring a card game called Parsnit, which is overseen by a witch and played in the nearby swamplands. In this increasingly magical world, Cajoleas highlights the complex relationship between a father, his adoring son, and the truth. The Rambling is an engaging book for middle-grade readers.”
— Lia Lent, WordsWorth Books, Cambridge, MA

From the author of Goldeline, a Booklist Top 10 First Novels for Youth pick, comes a mesmerizing middle grade fantasy about family and the power of storytelling. Perfect for fans of The Girl Who Drank the Moon and The Thickety.

Buddy Pennington is headed to river country, hoping his luck might change. He’ll be better off with his daddy, a wandering soul and a local legend for his skills at Parsnit, a mysterious card game of magic, chance, and storytelling. But no sooner are Buddy and his pop reunited than some of Pop’s old enemies arrive to take him away. Boss Authority, the magical crime lord who has held the rivers in his grasp for years, is ready to collect on an old debt Buddy’s father owes.

Now Buddy must set out on a dangerous rescue mission, learning to play Parsnit with the best of them as he goes. Because the stars are aligning for one last epic duel—one that will require a sticky-fingered ally, a lucky twist of fate, and the hand of a lifetime. And in this game, you’re only as strong as the story you tell.

Jimmy Cajoleas grew up in Jackson, Mississippi. He earned his MFA from the University of Mississippi and now lives in Brooklyn. Goldeline is his first novel, followed by The Rambling. Visit him online at www.jimmycajoleas.com.

“An imaginative, lightly fantastic tale that is as empowering as it is bewitching.”
— Booklist

“An intriguing tale. The Rambling is an engaging book for middle-grade readers.”
— Shelf Awareness